PARIS, France (AFP) — From the polar ice cap to the Mariana Trench 10 kilometres below the waves, synthetic microfibres spat out by household washing machines are polluting oceans everywhere.

The world has woken up over the last year to the scourge of single-use plastics, from bottles and straws to ear swabs and throw-away bags, resulting in legislation to restrict or ban their use in dozens of countries.

A lot of this visible debris winds up in the sea, where it gathers in huge floating islands called gyres, entangles wildlife from turtles to terns, and hangs suspended in water like dead jellyfish.

But a major source of marine pollution — microscopic bits of polyester, nylon and acrylic — has up to now gone largely unnoticed, experts say.

Most people don’t realize it, but “the majority of our clothes are made from plastic,” said Imogen Napper, a researcher at the University of Plymouth.

“We wash our clothes regularly, and hundreds of thousands of fibres come off per wash,” she told AFP, “This could be one of the main sources of the plastic pollution into the environment.” 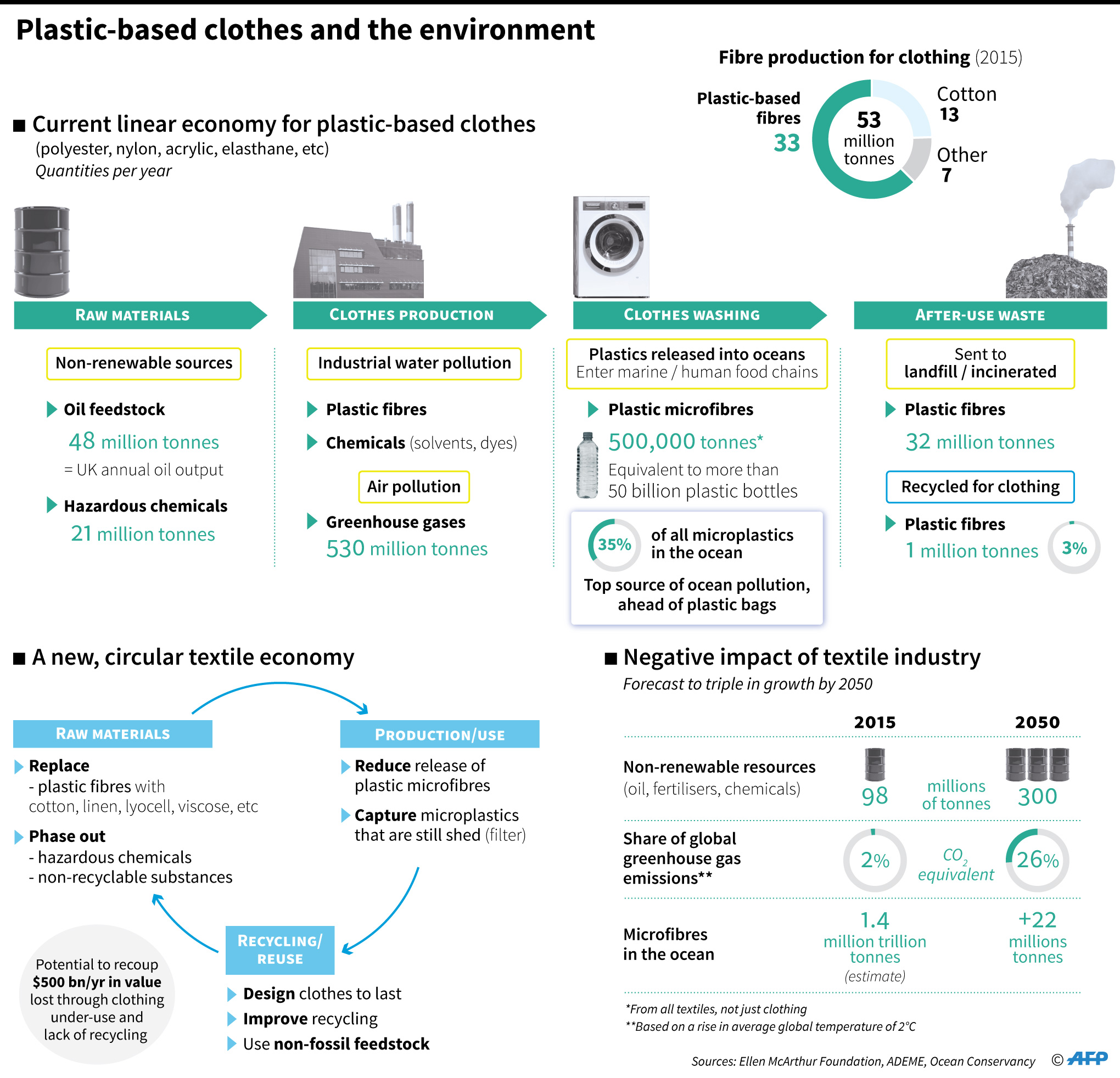 “How do we remove something that is so small?”, she added.

A 2015 report from the Ellen McArthur foundation estimated that half-a-million tonnes of microfibres leached into waterways every year, with 53 million tonnes of new textiles produced annually.

The average family in the United States and Canada unleashes more than 500 million microfibres into the environment each year, according to the Ocean Wise organization.

The vast majority of those minuscule bits of textile — whether synthetic or not — are intercepted during water treatment, but nearly 900 tonnes winds up in the ocean all the same.

In less developed countries, however, far more of those particles will not get intercepted, adding to the flood of plastic streaming into the sea.

But forensic clues are hard to come by, explains Peter Ross, co-author of the Ocean Wise report.

“The evidence disappears quickly, with weak or dead micro-organisms eaten by other species,” he explained.

Recent research has focused on how to reduce the volume of micro-pollution shed when we wash clothes — besides the obvious step of simply washing them less often.

“When you do the laundry, you can reduce the impact by lowering the temperature — above 30 degrees Celsius textiles break down more easily,” said Laura Diaz Sanchez, a campaigner for NGO Plastic Soup Foundation.

“Liquid detergent is better than powder, which has a scrubbing effect,” she added. “Also, don’t use a dryer.”

“This is something we can stop,” insisted Mojca Zupan, founder of the Slovenian-based startup PlanetCare.

“Your car has filters, your washing machine should have them too,” she said, explaining how the ones she makes — endorsed by the Plastic Soup Foundation — are self-installing. “Every machine made from now on should be neutral to the environment.”

There are other laundry gadgets that make environmental claims, some of them contested.

Spiky laundry balls — themselves made of plastic — and mesh bags to contain a load are also promoted as eco-friendly accessories for use in dryers.

“It may be useful to stop big entanglements but it doesn’t do anything for tiny fibres,” said Francesca de Falco, a researcher at the Institute for Polymers, Composites and Biomaterials in Italy.

Bottom line? There are no miracle solutions. “The only one would be to not wear any clothes at all,” said Sanchez.

The best approach to tackle the problem is with separate solutions tailored to each step of the process — clothing manufacture, washing, and treatment plants, said de Falco.

Each synthetic material has properties, such as the way in which it is woven, that may have an impact.

In an effort to do better, some brands work with scientists to test clothes particularly prone to shedding microplastics, such as down jackets and stretch T-shirts.

Are natural fibres the answer? Not so simple, experts say. Cotton, for example, requires huge quantities of water and pesticide when grown.

“Switching to natural alternatives is not really the answer because it can be very expensive and they have their own environmental problems,” said Napper.

“We live in a ‘fast fashion’ culture — when you consider how much we actually buy, it is quite scary.”