(Eagle News) — The Philippine Dumagat tribe in Luzon has a unique traditional way of cooking food, harking backing to the old days when their ancestors had to cook food using what could be found in the forest.  With the use of bamboo, they are able to cook rice and even the Philippine dish “sinigang”.  They also cook chicken in a unique way while buried in the ground.

Sinigang, a sour savory soup cooked either with fish or meat, is cooked using katmon fruit which can be found in the Philippine forests.  Katmon is also known as elephant apple (Dillenia philippinensis) and is endemic in the Philippines.  They also use Lando leaves, along with Katmon, as souring ingredients.

The fish, vegetables, salt, water and the natural souring ingredients — Katmon and Lando — are placed inside a bamboo.  The bamboo is then placed directly on the fire.

-Cooking rice inside a bamboo –

The Dumagats also use bamboo to cook rice.  First they put water inside the bamboo, then a cup of rice is wrapped using a leaf from the indigenous Tagbak plant, also endemic to the Philippines.  The piece of bamboo (kawayan) or buho is also placed directly on the fire until the rice is cooked. 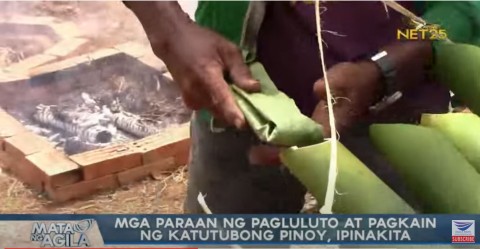 -Whole chicken cooked while under the ground-

They also have a unique way of cooking meat.  In this case, chicken, which they first marinate in their favorite sauces and spices.  Lemongrass can also be placed inside the chicken too.  Then the whole chicken is wrapped in banana leaves.

Then they prepare the soil that will also be used to cover the chicken.  First, they set aside the soil (mostly the clay type of soil), putting water into it until it becomes a sticky doughy clay mud.  This is then used to cover the whole banana-leaf wrapped chicken.

The clay-covered chicken is placed in a hole in the ground, and covered with dried grass (dayami) which is then set on fire.  This will serve as the undergound oven that will cook the meat inside.

The Dumagats in Luzon still cook the traditional way to preserve their culture and way of life,  Their food is simple but delicious and healthy as shown in this video report by Eagle News stringer/correspondent Raymard Gutierrez.