HOLLYWOOD, CALIF. (Eagle News) — Stars were shining brightly in Hollywood both in the night sky and at Raleigh Studios where the EBC Film “Guerrero” won Best Foreign Feature on Saturday, August 24, 2019 at the Los Angeles Independent Film Festival Awards (LAIFFA).

Basallaje said that viewers will have the opportunity to watch the movie’s sequel, “Guerrero Dos”, which is set to be released later this year. She also commented on one of the themes of “Guerrero”.

“Guerrero teaches us how to keep going even when the easiest thing to do is surrender,” Basallaje said.

Festival producer, Jaz Shrestha, also spoke about the value of films like Guerrero during these times.

“That’s one thing that is needed in this particular time,” Shrestha said. “I think, the time we’re living in is where the faith and those values brings much more peace and calm into people’s life, I think that’s very important.”

Guerrero was among the over 130 films whose trailer was screened in one of the theatres on this historic Hollywood studio lot.

“There are many festivals but I think having it in a prominent place like the Raleigh Studios, like right in the heart of Hollywood, I think that’s very important and people have changed their life by being winners in these kinds of platforms and they’re appreciated more in their countries and it actually boosts the energy and the passion for these filmmakers,” Shrestha said.

After almost a full day of movie watching, award recipients walked the red carpet for photo opportunities and interviews with the media. The importance of independent film festivals and recognizing and promoting the work of filmmakers was underscored by the awardees.

“You get to dress up, it’s fancy, you get to see things that people put their hard work into that they really believe in which is a lot different that you might find at the normal cinema,” said Justin McAleece, Co-Director and Co-Producer of “Bardo Blues”.

Victoria Rhodes, Executive Producer of “Song Of The Open Road”, echoed the importance of events like this.

“When you’re just starting out, it is so difficult to try to get any recognition and to see how can I grow as a filmmaker. And if you do get some recognition, then you can start to see other projects on how they have gone and then, you are able to perfect your craft,” said Rhodes.

“As a film director who’s done most of my work in Asia and the Himalayas, it’s a real honor to be here in Los Angeles because of course, Hollywood is the center of the international film industry and to be able to be here in Hollywood and to get recognition for a documentary film, that is being filmed in some of the remote parts of the Himalayas, here, downtown Hollywood, is for us a big honor,“ said Laurence Brahm, Director of “Searching For The Lotus-Born Master”.

This award from LAIFFA added to Guerrero’s growing list of film festival awards and cemented the film’s credentials in the independent film industry circuit as a movie which must be included as part of the cinematic discussion. 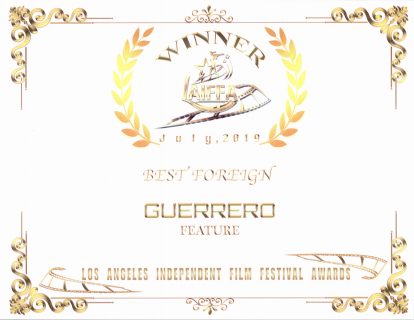