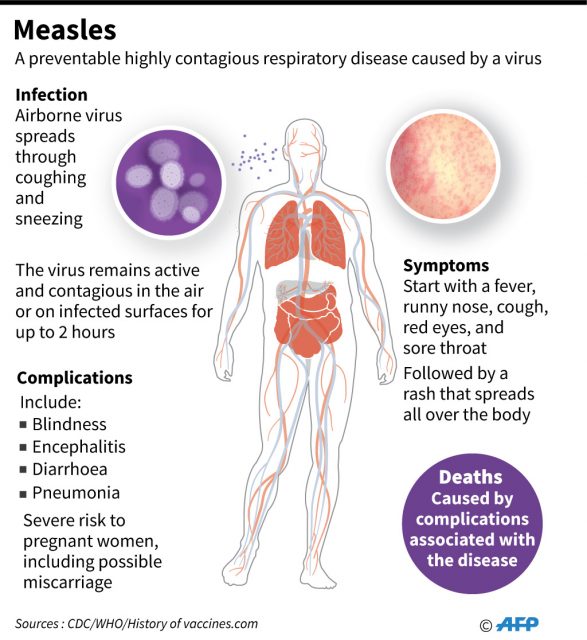 GENEVA, Switzerland (AFP) — Measles cases nearly tripled globally during the first seven months of the year compared to the same period in 2018, the World Health Organization said Tuesday, amid growing concern over public resistance to the vaccine.

So far this year, 364,808 measles cases were reported around the world, compared to 129,239 cases during the first seven months a year earlier.

These numbers are “the highest (registered) since 2006,” WHO spokesman Christian Lindmeier told reporters in Geneva.

The numbers are especially worrying since only about one in 10 actual measles cases are believed to be reported worldwide, according to WHO.

Measles, which is highly contagious, can be entirely prevented through a two-dose vaccine, but the World Health Organization (WHO) has in recent months sounded the alarm over-vaccination rates.

Democratic Republic of Congo, Madagascar and Ukraine registered the highest number of cases, WHO said.

In Madagascar, which registered around 127,500 cases during the first half of this year alone, numbers have meanwhile dropped considerably in recent months following an emergency national vaccination campaign, the UN health agency stressed.

Measles cases have soared worldwide, with the African region seeing a 900-percent jump in cases year-on-year, while cases rose 230 percent in the western Pacific.

Angola, Cameroon, Chad, Kazakhstan, Nigeria, the Philippines, Sudan, South Sudan, and Thailand have all seen major outbreaks of the disease.

The United States has meanwhile registered 1,164 cases so far this year, compared to 372 for all of 2018 and the highest number on record in a quarter-century.

And in the European region, nearly 90,000 cases have been registered this year — well above the 84,462 cases registered last year.

Measles — an airborne infection causing fever, coughing and rashes that can be deadly in rare cases — had been officially eliminated in many countries with advanced healthcare systems.

But the so-called anti-vax movement — driven by fraudulent claims linking the MMR vaccine against measles, mumps and rubella, and a risk of autism in children — has gained traction.

WHO pointed out that the reasons for people not being vaccinated vary significantly between communities and countries, with a lack of access to quality healthcare or vaccination services hindering some from getting the jabs, while others are led astray by “misinformation about vaccines, or low awareness about the need to vaccinate.”

The measles vaccine is a “safe and highly effective vaccine”, WHO stressed in a statement, urging “everyone to ensure their measles vaccinations are up to date.”

Uneven vaccination coverage and gaps and disparities between communities, geographic areas, and among age-groups has allowed measles to flourish even in countries with high national vaccine rates, WHO warned.

“When enough people who are not immune are exposed to measles, it can very quickly spread,” it said.