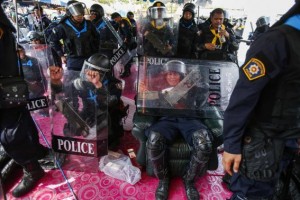 (Reuters) – Gun battles erupted between Thai police and anti-government protesters in Bangkok on Tuesday and four people were killed and dozens wounded as authorities made their most determined effort yet to clear demonstrators from the streets.

In a day of tangled developments in Thailand’s long-running political crisis, the country’s anti-corruption body announced it was filing charges against Prime Minister Yingluck Shinawatra relating to a rice subsidy scheme that has fuelled middle-class opposition to her government.

The troubled rice scheme, already near collapse, suffered another blow when the Government Savings Bank (GSB) said it was scrapping a loan to a state farm bank that could have been used to prop the scheme up in the face of a revolt by depositors.

The clashes were some of most intense between protesters and security forces since the campaign to unseat Yingluck began in November. The military, which has said it would intervene if police are unable to control security in the capital, has not publicly commented on the violence.

The protests are the latest installment of an eight-year political battle broadly pitting the Bangkok middle class and royalist establishment against the poorer, mostly rural supporters of Yingluck and her billionaire brother, former premier Thaksin Shinawatra.

Reuters witnesses heard gunfire and saw police firing weapons in the Phan Fa Bridge area in the old quarter of the city. Police said they had come under fire from a sniper on a rooftop and M-79 grenades were also fired.

A policeman was killed by a gunshot and several were wounded by a grenade, security officials said.

The Erawan Medical Center, which monitors hospitals, said on its website that three protesters had also been killed by gunfire. The centre said 64 people had been wounded but did not say how many were police and how many were civilians.

Security officials said earlier that 15,000 officers were involved in the operation, “Peace for Bangkok Mission”, to reclaim protest sites around central Bangkok’s Government House and other government offices in the north of the capital.

Yingluck has been forced to abandon her offices in Government House by the protesters, led by a former deputy premier, Suthep Thaugsuban, who have also blocked major intersections since mid-January.

Suthep told supporters at an evening rally in Bangkok’s central business district that protesters would gather on Wednesday outside Yingluck’s temporary offices at a Defence Ministry facility in north Bangkok.