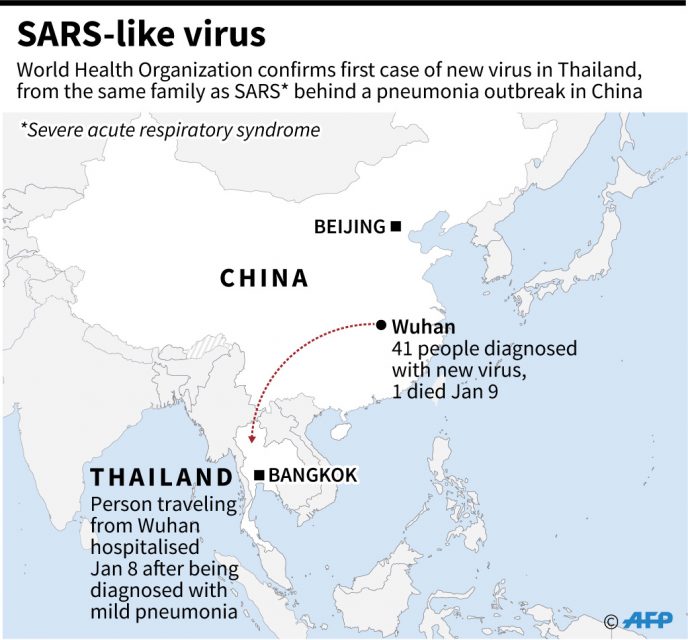 GENEVA, Switzerland (AFP) — A new virus from the same family as the deadly SARS disease has spread beyond China’s borders for the first time with a case emerging in Thailand, UN and Thai officials said on Monday.

Thai doctors diagnosed with a Chinese traveler with mild pneumonia on January 8 later confirmed to have been caused by the so-called novel coronavirus — which has already given rise to 41 pneumonia-like cases and one death in China.

The outbreak has caused alarm because of the link with SARS (Sudden Acute Respiratory Syndrome), which killed 349 people in mainland China and another 299 in Hong Kong in 2002-2003.

The UN health agency (WHO) confirmed that the outbreak in the city of Wuhan was caused by a previously unknown type of coronavirus, a broad family ranging from the common cold to more serious illnesses like SARS.

“Laboratory testing subsequently confirmed that the novel coronavirus was the cause,” WHO spokesman Tarik Jasarevic told AFP in an email, referring to the case in Thailand.

WHO said it might soon host an emergency meeting on the spread of the new virus.

Thai Health Minister Anutin Charnvirakul stressed to reporters in Bangkok Monday that a 61-year-old Chinese woman who had traveled from Wuhan “was infected with the virus from outside Thailand”.

Thai health officials said on Monday she was recovering.

Authorities in Wuhan said a seafood market in the city was the center of the outbreak. It was closed on January 1.

There is so far no indication of human-to-human transmission of the virus.

Scientists in Hong Kong’s Department of Health said on Saturday that genetic sequencing of the virus from a Wuhan patient, published online by a Chinese expert, indicated it was 80 percent similar to SARS found in bats.

WHO said on Monday it was not surprising that the virus had spread beyond China.

Thai authorities have been on high alert, with airport officials checking all passengers coming from Wuhan to the kingdom’s major airports.

An official from the Public Health Emergency Operation Center told AFP the infected woman traveling from Wuhan had been intercepted on arrival in Thailand after airport officials determined she had a fever.

WHO said it had issued guidance on how to detect and treat people with the new virus and stressed that China’s decision to rapidly share the genetic sequencing of the virus made it possible to quickly diagnose patients.

WHO has not recommended any specific measures for travelers or restrictions on trade with China, but stressed on Monday it was taking the situation seriously.

“Given developments, WHO Director-General Dr. Tedros Adhanom Ghebreyesus will consult with Emergency Committee members and could call for a meeting of the committee on short notice,” it said in a statement.

During such meetings, experts determine whether the UN health agency should declare an international health emergency — a designation used only for the gravest epidemics.