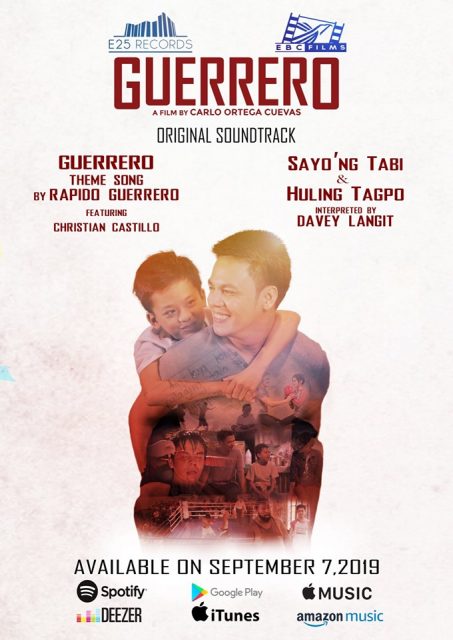 The soundtrack is produced by E25 Records in partnership with EBC Films.

The artists on the album include Rapido and Christian Castillo performing the film’s theme song “Guerrero” the lyrics of which was written by Rapido. The song starts with an audio of Miguel Guerrero, one of the main characters in the film, saying “Ganun daw talaga. Ang lahat ng bida ay palaging talo sa umpisa” (It’s really like that. Every winner always experiences defeat at the start).  Christian Castillo then starts singing the song’s very powerful message about facing great challenges in life.  His rendition adds to the song’s flavor with hip-hop beats and a catchy melody.

Award-winning singer/composer Davey Langit interpreted the other songs in the film’s soundtrack, namely “Huling Tagpo” and “Sayo’ng Tabi.” The lyrics and music of both songs were written and composed by the movie’s award-winning director Carlo Ortega Cuevas.

The song “Huling Tagpo” (Last Moment) accepts that every relationship has to end.  It is a break-up song which everyone can relate to.  “Sayo’ng Tabi” (By Your Side), on the other hand, conveys the value of being there no matter what.

Rapido says he  wrote the song “Guerrero” because the story inspired him,  He invited Christian Castillo to perform with him.

“I created the song in 30 minutes that includes the lyrics and the melody.  Recording the song was longer than creating it,” he said as this already included the recording of the vocals and mastering the track.

Castillo says that he is “open to new ideas and suggestions”  when working with Rapido.  He said this “makes it liberating.”

“I am able to add my own touch to the tracks we work on. We had to work fast on the ‘Guerrero’ theme song because we were chasing a deadline, and the ideas for the hook and the bridge came just as fast too. We finished recording in less than 3 hours,” he explained.

“While taking breaks during the shooting of Guerrero, I had my guitar with me (which) inspired me to create ‘Sayo’ng Tabi’ and ‘Huling Tagpo’,” the film’s director, Cuevas, added.

Previously, Davey Langit has given this advice to aspiring song writers and composers.

“Keep improving your craft. Dapat everyday gumagaling ka sa pagsulat ng kanta. As long as you keep working hard on something that you love,” he said

Rapido is the very first recording artist of E25 Records. He is a Flip Top Battle Emcee, Disc Jockey, Songwriter/Recording Artist, while Davey Langit is an award-winning singer/composer and Pinoy Dream Academy finalist.

One can also check the Official Page of E25 Records, and the Facebook page of EBC Films