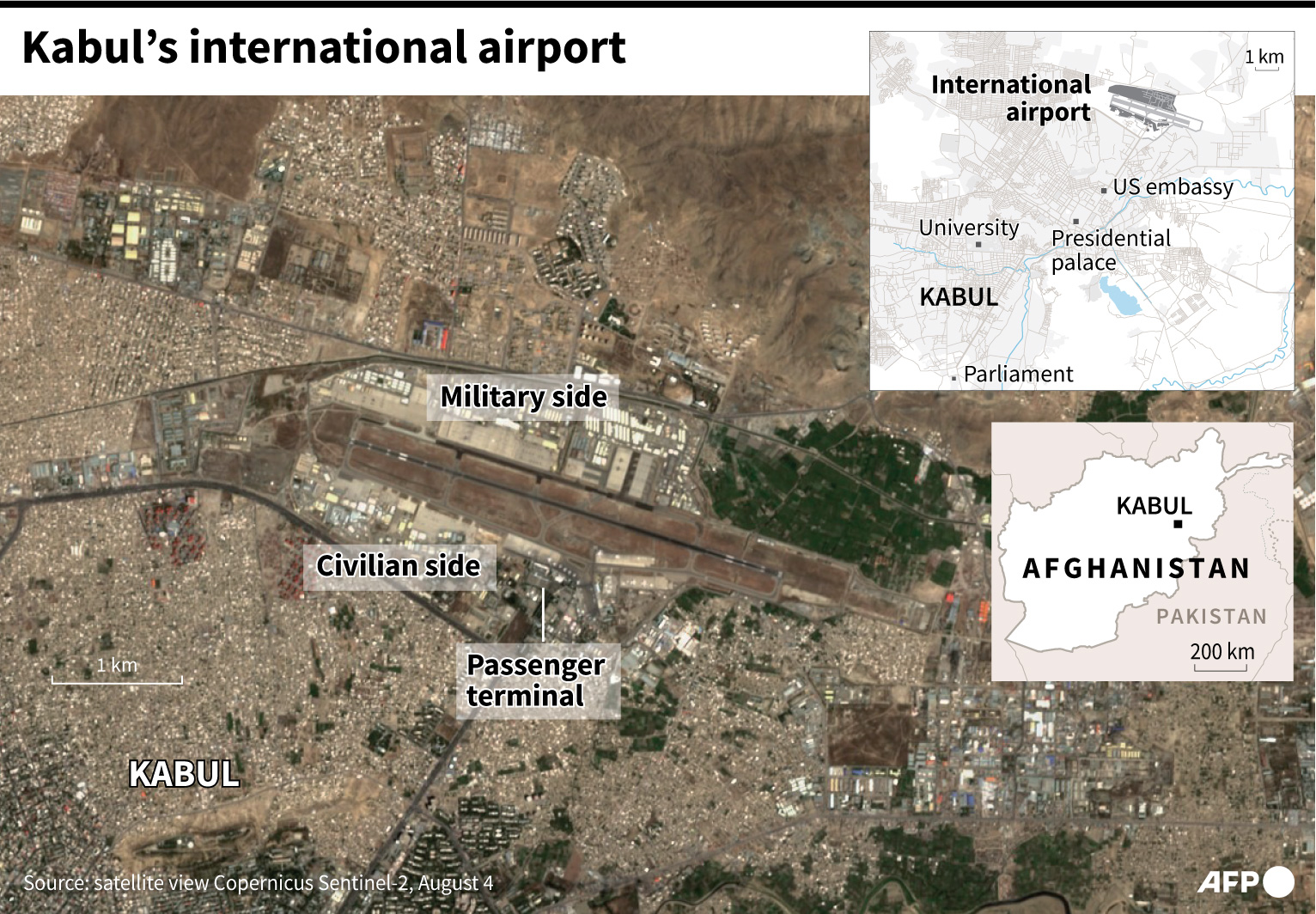 KABUL, Afghanistan (AFP) — Western security forces were involved in an exchange of fire with unidentified gunmen Monday at Kabul airport, as US President Joe Biden sought to speed up the chaotic evacuation of tens of thousands of people from Taliban-controlled Afghanistan.

One Afghan was killed and three others were injured in a dawn firefight that according to the German military erupted between Afghan guards and unknown assailants.

German and American troops “participated in further exchange of fire”, the German army said in a statement.

This was the latest episode in a chaotic operation overseen by the US army that has seen about 30,000 people evacuated from Afghanistan since the Taliban marched into Kabul on August 15, taking effective control of the country.

The Taliban, infamous for an ultra-strict interpretation of sharia law during their initial 1996-2001 rule, have repeatedly vowed a softer version this time.

But terrified Afghans continue to try and flee, overwhelming the operation at Kabul airport and leading to tragic scenes in which at least eight people have died.

The Taliban’s victory ended two decades of war as they took advantage of Biden’s decision to withdraw nearly all US troops from the country.

Biden, who has redeployed thousands back to Afghanistan to oversee the evacuations, has insisted he wants to end the US military presence and the airlifts by August 31.

But with the European Union and Britain saying it would be impossible to get everyone out by then, Biden is under pressure to extend the deadline.

Speaking at the White House, Biden said Sunday he hoped the airlift would not be extended, but said talks were underway to explore that possibility.

“There’s discussions going among us and the military about extending,” Biden said.

He acknowledged the tragic scenes at the airport, which have also included babies and children being passed to soldiers over razor-wire fences and men clinging to the outside of departing planes.

But he said they were part of the cost of departure.

“There is no way to evacuate this many people without pain and loss and heartbreaking images you see,” he said.

In an effort to ramp up the airlift, the US government ordered six major commercial airlines to fly back to the United States those who have been evacuated from Kabul to US bases in the Gulf and Europe.

Biden spoke after the Taliban, who have been holding talks with elders and politicians to set up a government, slammed the evacuation.

“America, with all its power and facilities… has failed to bring order to the airport,” Taliban official Amir Khan Mutaqi said.

“There is peace and calm all over the country, but there is chaos only at Kabul airport.”

In the streets of the capital, the Taliban have indeed enforced a calm of a kind, with their armed forces patrolling the streets and manning checkpoints.

Visually, they have also been looking to stamp their authority, ensuring the tri-coloured national flag is replaced with their white banner.

At a roadside in Kabul at the weekend, young men sold Taliban flags, which bear in black text the Muslim proclamation of faith and the regime’s formal name: “Islamic Emirate of Afghanistan”.

“Our goal is to spread the flag of the Islamic Emirate throughout Afghanistan,” said seller Ahmad Shakib, who studies economics at university.

Outside of Kabul, there have been flickers of resistance against the Taliban.

Some ex-government troops have gathered in the Panjshir Valley, north of the capital — long known as an anti-Taliban bastion.

Some pro-Taliban Twitter accounts said Sunday the new regime was sending hundreds of fighters to the valley after “local state officials refused to hand it over peacefully”.

The Islamists have “massed forces near the entrance of Panjshir”, tweeted Amrullah Saleh, vice president of Afghanistan in the previous government who has taken refuge in the area.

One of the leaders of the movement in Panjshir, named the National Resistance Front, is the son of famed anti-Taliban commander Ahmad Shah Massoud.

The NRF is prepared for a “long-term conflict” but is also still seeking to negotiate with the Taliban about an inclusive government, its spokesman Ali Maisam Nazary told AFP in an interview on the weekend.

“The conditions for a peace deal with the Taliban is decentralisation, a system that ensures social justice, equality, rights, and freedom for all,” he said.