(Eagle News) – Noted American singer-composer David Pomeranz will be singing on Sunday’s (May 17) episode of Eagle Broadcasting Corporation’s online concert series that will benefit COVID-19 health workers and other frontliners.

Pomeranz, known for numerous international hit songs as “Born For You,” “The Old Songs” and “Got To Believe in Magic,” has recordings and songwriting projects that have earned him 22 platinum and 18 gold albums.

Watch his special performance on Sunday, May 17, at EBC’s “Enjoy Music Beyond the Crisis” from 9 a.m. to 11 a.m. This concert series has been airing online and on broadcast every Sunday since April 26 to mark EBC’s 52nd anniversary.

Pomeranz himself invited his fans to watch his performances on Sunday, May 17.

“I want to invite you to watch my upcoming performances on the “Enjoy the Music Beyond the Crisis” benefiting the FYM Medical Foundation, an awesome group,” he said.

He also thanked EBC for inviting him to perform in the online concert. 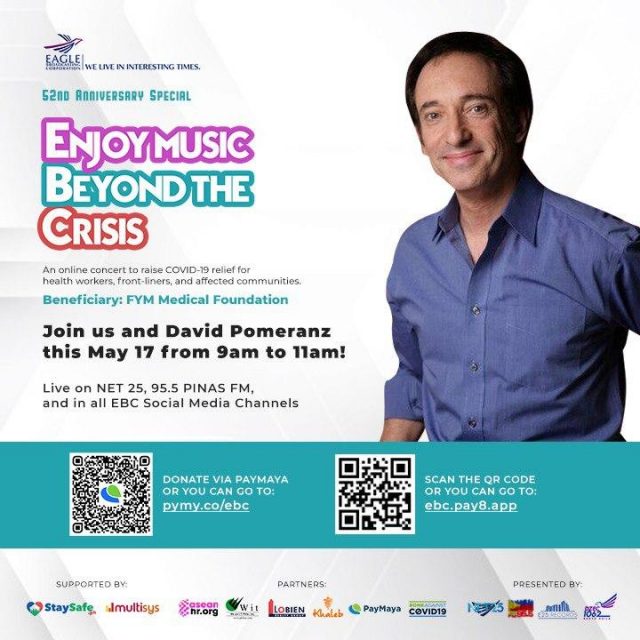 Pomeranz’ music has inspired millions across the world, transcending boundaries with his magical melodies and lyrics of love and hope.

He has also written music for theater, films and television.

On Sunday, he will be performing his new song, “No Worries, aside from other special performances giving a salute to frontliners wherever they may be.

Pomeranz, who has visited the country numerous times to sing and perform, has said in previous interviews that the Philippines holds a special place in his heart.