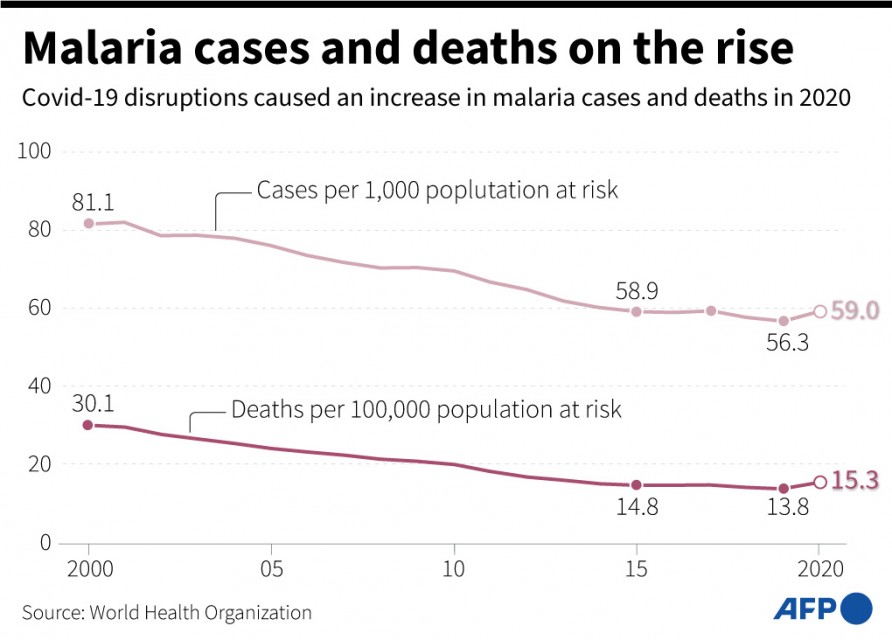 In a fresh report, the UN health agency found that Covid-19 had reversed progress against the mosquito-borne disease, which was already plateauing before the pandemic struck.

I linked approximately two thirds of those additional deaths to disruptions in the provision of malaria prevention, diagnosis and treatment during the pandemic, the WHO said.

But it stressed that the situation “could have been far worse”.

The UN agency pointed to its projection early in the pandemic that the service disruptions could cause malaria deaths to double in 2020.

“Thanks to the hard work of public health agencies in malaria-affected countries, the worst projections of Covid’s impact have not come to pass,” WHO chief Tedros Adhanom Ghebreyesus said in a statement.

“Now, we need to harness that same energy and commitment to reverse the setbacks caused by the pandemic and step up the pace of progress against this disease.”

Since the turn of the century, the world has made steady progress against malaria, with annual cases falling 27 percent by 2017 and deaths plunging by over 50 percent.

But the numbers stalled in the years prior to the pandemic.

The WHO report showed that 24 countries had registered increased malaria deaths since 2015 — the baseline year for the agency’s global malaria strategy.

“I think we are on the verge of a potential malaria crisis,” Dr Pedro Alonso, head of WHO’s Global Malaria Programme, told reporters.

Not only are we not getting closer to elimination or eradication globally, he warned, “but the problem (is) becoming worse in a substantial number of parts of Africa.”

But a number of countries are making progress.

Between 2000 and 2020, 23 countries managed to go three consecutive years with no local transmission, and so far in 2021, China and El Salvador were certified malaria-free.

Another positive step is the development of the first malaria vaccine.

Last week, the global vaccine alliance, Gavi, said it had approved nearly $156 million in funding to roll out the jabs to children in sub-Saharan Africa.