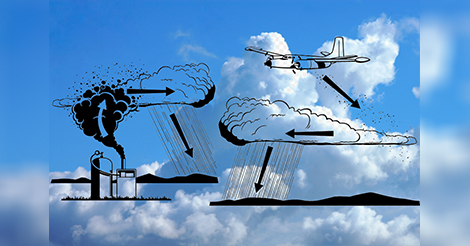 QUEZON City, Philippines (January 18) – The El Niño phenomenon currently occurring in the Asia Pacific region –yup, our country’s included—continues to intensify. It started on September 2015, and is expected to endure till the first quarter of this year. Along with the scorching heat, different problems comes along with it, such as lack of rainfall, poor harvests and significantly declined water supply. With these things in consideration, weather modification and manipulation comes into the scene. Cloud seeding, for example, is utilized to increase chances of rainfall. In our country’s case, the method is done near dams and crop fields.

A chemical crystalline – silver iodide, the most common—is scattered to the clouds to make it heavy.  Potassium iodide and dry ice are also used. Of course, everything is studied before scattering the substance; from the track of selected cloud, its density and buoyancy. The dispersion of silver iodide is commonly done by plane.

It’s not only used in promoting rainfall, but also used to improve air quality by downing pollutants hanging in the atmosphere.

Supplying the needed rainfall is its main pro, but, some researchers criticize the use of silver iodide in cloud seeding. According to them, high doses of the substance is toxic, since a part of its compound is silver, a heavy metal classified as toxic. Prolonged exposure can cause argyria, where the skin turns blue or bluish-grey. However, the arguments were blocked by scientists, mentioning the toxicity used in cloud seeding is low in order, and only use 1% of silver – in industry emission– on the atmosphere.

Another is the unpredictable behavior of the clouds. The rainfall could fall to untargeted areas, making it an act of risk and foresight. In other countries, heavy rain, snowfall and hailstorms often happen due to this kind of manipulation.

Well, all things have its cheers and jeers. It’s not only cloud seeding that can save us from the scorch, it is the conservation of water and food that’s prime. Survivability and adaptability depends on us, because if not, we humans would have gone extinct thousands of years ago.