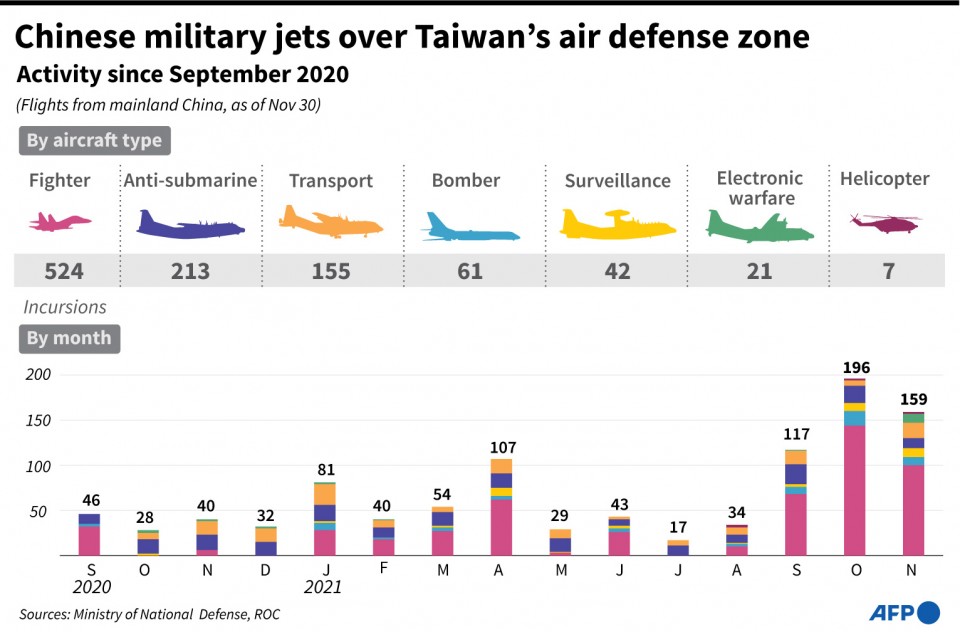 by Amber Wang with Jerome Taylor in Hong Kong

TAIPEI, Taiwan (AFP) — Chinese warplanes made 159 incursions into Taiwan’s air defence zone in November according to AFP’s database, the second-highest month on record as Beijing continues to pile military pressure on the democratic island.

Self-ruled Taiwan lives under the constant threat of invasion by China, which views the island as its own territory and has vowed to seize it one day, by force if necessary.

Beijing has ramped up pressure on Taiwan since President Tsai Ing-wen came to power in 2016, as she rejects its stance that the island is part of “one China”.

Over the past 14 months, the sabre-rattling has reached new peaks after Beijing began sending an increasing number of warplanes into Taiwan’s air defence identification zone (ADIZ), which Chinese military aircraft had previously largely avoided.

The escalatory moves have heightened fears among Western allies like the United States and Japan that China could order an invasion of Taiwan, even if they consider it unlikely for now.

On Tuesday, the Pentagon unveiled plans to reinforce deployments and bases directed at China, upgrading and expanding military facilities in Guam and Australia.

Taiwan’s defence ministry began making the Chinese warplane incursions into the ADIZ public in September 2020 and AFP has built a database collecting details of the flights, which have been increasing in both size and frequency.

November was the third month in a row where more than 100 warplanes have made forays.

The defence zone is not the same as Taiwan’s territorial airspace. Instead, it includes a far greater area that overlaps with part of China’s own air defence identification zone.

October remains the busiest month on record with 196 incursions, 149 of which were made over just four days as Beijing marked its annual National Day.

Taiwan’s military recorded only three days in November without an incursion.

“The recent situation is particularly grim with almost non-stop (incursions),” defence minister Chiu Kuo-cheng said on Monday, after a sortie by 27 Chinese aircraft the day before, the biggest of the month but only the fifth-largest daily incursion on record.

China’s “intention is to slowly exhaust (us), to let you know that we have this power,” he added.

Chiu has previously warned that military tensions between Taiwan and China are at their highest in four decades, adding Beijing would be in a position to launch a full-scale invasion in 2025.

In September, the third-highest month on record, there was an incursion every day apart from one day with a total of 117 sorties.

So far this year, nearly 900 Chinese planes have intruded into Taiwan’s ADIZ. Since Taiwan’s defence ministry first began making the forays public in September last year, more than 1,000 flights have been made.

A biennial defence report released by Taipei’s defence ministry last month said China’s “frequent manipulation of grey zone threats” such as the warplane incursions are aimed at “seizing Taiwan without a fight”.

“The PRC coercive action is obviously meant to bring Taiwan to its knees and keep us away from our democratic partners,” foreign minister Joseph Wu tweeted on Monday.