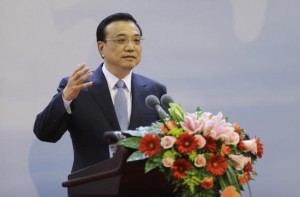 (Reuters) – Chinese Premier Li Keqiang has called for a complete halt to construction of new government buildings, training centers and hotels, throwing his weight behind a standing order that the authorities have had difficulty enforcing in recent months.

Li’s call came during a meeting of China’s State Council, or cabinet, and was part of broad efforts to curtail government spending, the state-run Xinhua news agency reported on Tuesday.

In July, the government ordered a five-year suspension of the construction of new official buildings. Results have been patchy, however, and in December the central government warned that the ban was not being enforced effectively.

In the face of public anger over graft and extravagance by some officials, China’s new leadership over the past year has sought to curtail everything from bribery and gift-giving to lavish banquets and wasteful government expenditure.

Li also called for the number of people working in government to be restricted and said the money saved should be spent to improve the lives of ordinary people, Xinhua reported.

He pledged “complete transparency” regarding what are known as the “three public consumptions” by government – vehicle purchases and maintenance, overseas trips and official receptions.

“A strict accounting system should be enforced as a safety lock on public funds. Auditing and supervision should be imposed on all public funds, state-owned properties and state-owned resources,” Xinhua quoted Li as saying.

Activists have also urged the government to require officials to publicly disclose their personal assets but officials’ wealth is a highly sensitive issue and some of the most outspoken campaigners have been jailed or detained.

The websites of the New York Times and Bloomberg News were blocked in China following reports in 2012 on the wealth of the families of top Chinese leaders.