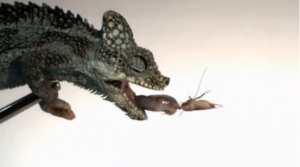 A tongue lashing you wouldn’t want to be on the end of… especially if you’re this chameleon’s favorite snack.

But the rapid recoil of elastic tissues in its tongue when it strikes puts its bigger relatives to shame.

Research published in scientific journal Nature on the feeding technique of 20 species of chameleon found smaller ones could project their tongues 2-and-a-half times their body length.

The speed is second only to the salamander in the vertebrate world.

The study suggests that smaller chameleons had to evolve and develop more effective feeding apparatus in order to survive. (Reuters)