The IEA said that emissions from coal — the most polluting fossil fuel — fell nearly 200 million tonnes, around 1.3 percent from 2018 levels. This was largely offset by increases in emissions from oil and natural gas, however.

Nearly 80 percent of that increase came from Asia, despite slowing growth in major emitters China and India.

“We now need to work hard to make sure that 2019 is remembered as a definitive peak in global emissions, not just another pause in growth,” said IEA Executive Director Fatih Birol.

“We have the energy technologies to do this, and we have to make use of them all.”

The landmark 2015 accord also enjoins governments to aim for a lower temperature cap of 1.5C.

The United Nations says that global emissions must fall by more than 7.6 percent annually through 2030 to keep 1.5C in play. 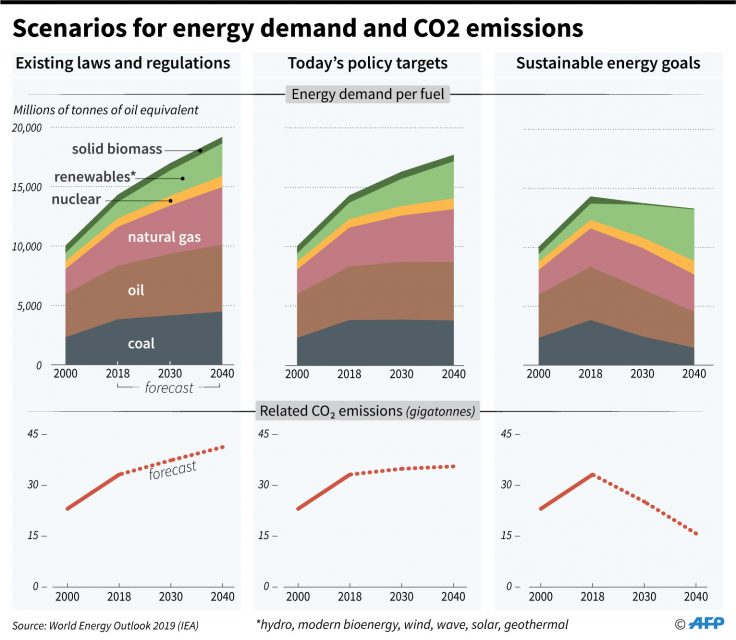 Last year saw some major emitters cut their energy-related emissions significantly. CO2 emissions in the United States for example fell by 140 million tonnes and are now at their lowest levels since 2000.

The fall was partly due to a 15 percent decline in coal usage during a year that saw natural gas prices plumb record lows.

However emissions rose across much of Asia, with coal demand continuing to account for more than half of energy use there, the IEA said.

“I think we need another year or two to see if things are really changing,” he told AFP.

“When there is a little weak economy, a few unusual factors, it is hard to isolate what is good progress and what is just luck from the unusual factors.”

Michael Mann, director of Penn State University’s Earth and Environmental Systems Institute, said that Tuesday’s IEA report was “a little bit of good news at what might seem a bleak time climate-wise.

“This suggests that we are indeed starting to bend the emissions curve down, but flat-lining isn’t good enough,” he told AFP.

“We need to bring emissions down by about 10 percent a year for the next decade if there is any hope of keeping warming below the 1.5C danger threshold,” said Mann.