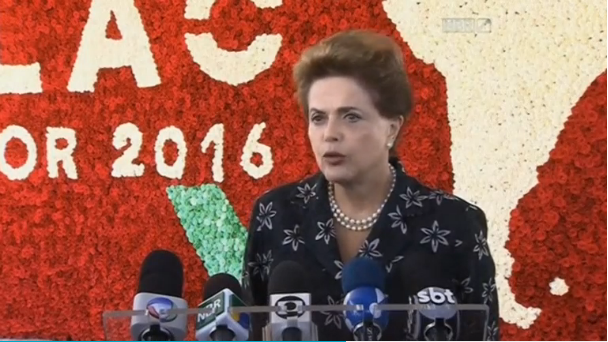 (REUTERS) — Brazil’s President Dilma Rousseff vowed on Monday to fight impeachment tooth-and-nail in the Senate after a heavy defeat in the lower house of Congress raised the likelihood of an end to 13 years of leftist rule in Latin America’s largest economy.
In a raucous vote late on Sunday that sparked jubilation among Rousseff’s foes, the opposition comfortably surpassed the two-thirds majority needed to send Brazil’s first female president for trial in the Senate on charges she manipulated budget accounts.
If the Senate votes by a simple majority to accept the case next month, as is expected, Rousseff would become the first Brazilian leader to be impeached for more than 20 years.
The crisis has paralyzed the government as it struggles to revive the economy from its worst recession in decades. It has also sparked a bitter struggle between Rousseff, a 68-year-old former Communist guerrilla, and her Vice President Michel Temer, 75, who would take power if she is impeached.
Addressing the nation on television, a combative Rousseff insisted that she had committed no impeachable crime and accused Temer of openly conspiring to topple her government in what she described as a ‘coup’.
“While I am very saddened by this, I have the force, the spirit and the courage to fight this whole process to the end,” Rousseff told the televised news conference. “This is just the beginning of the battle, which will be long and drawn out.”
Rousseff stands accused of a budgetary sleight of hand employed by many elected officials in Brazil: delaying payments to state lenders in order to artificially lower the budget deficit to boost her reelection bid in 2014.
Nevertheless, opinion polls show more than 60 percent of Brazilians support impeaching Rousseff, less than two years after the leftist leader narrowly won reelection. Her popularity has been crushed by the recession and a vast graft scandal at state oil company Petrobras.
A Rousseff aide said the government would focus on clawing back support in the 81-seat Senate, where it lacks the simple majority needed to prevent the case being accepted for trial. Given that it currently has the support of only 31 senators, the aide said the situation looked “very difficult.”
The government has been looking to Senate Speaker Renan Calheiros, a crucial but fickle ally of Rousseff’s, to delay the Senate vote as long as possible to give it time to negotiate. [L5N17K11H] However, Calheiros said on Monday he would remain neutral and would meet with party leaders in the Senate on Tuesday to define the calendar for the process.
PARALYZED GOVERNMENT
Hundreds of thousands of demonstrators from both sides of the impeachment battle took to the streets across Brazil on Sunday in peaceful protests. Millions watched the vote live on television.
The heavy margin of defeat in Sunday’s vote shocked many Workers Party insiders, who blamed treachery by allied parties. The final tally was 367 votes cast in favor of impeachment, versus 137 against, and seven abstentions. Two lawmakers did not show up to vote.
More than half the lawmakers who decided her fate on Sunday are themselves under investigation for graft, fraud or electoral crimes, according to Congresso em Foco, a prominent watchdog in Brasilia.
Claudio Couto, professor of political science at Fundação Getulio Vargas, said that Sunday’s loss dramatically weakened Rousseff’s ability to strike political bargains and shore up support for her government.
“It is almost impossible the Senate will not take up the impeachment. And with her removal for up to six months, the government’s power of persuasion will be dramatically diminished,” he said.
Senior Workers Party figures have pledged, if necessary, to take their struggle onto the streets, raising concerns that it could seek to destabilize a future Temer government.
Despite anger at rising unemployment, the party can still rely on support among millions of working-class Brazilians, who credit its welfare programs with pulling their families out of poverty during the past decade.
The U.S. State Department voiced confidence on Monday that Brazil would navigate the political crisis democratically in accordance with the constitution.
Brazilian financial markets have rallied strongly this year after a disastrous 2015 on the prospect of a more business-friendly Temer administration.
Brazil’s Bovespa stock index shed 0.75 percent on Monday, with traders citing profit taking after it gained more than 20 percent so far in 2016. The real also weakened more than 2 percent to 3.60 per dollar after the central bank intervened to prevent a sharp rise in the currency.
Once regarded as an emerging markets powerhouse, Brazil has been hit by the end of a long commodities boom as well as political instability. It lost its coveted investment grade credit rating in December.
Fitch, which has a negative outlook on Brazil’s ‘BB+’ sovereign rating, said it would focus on a new leader’s attitude to the corruption probe and efforts to stem the steep rise in government debt.