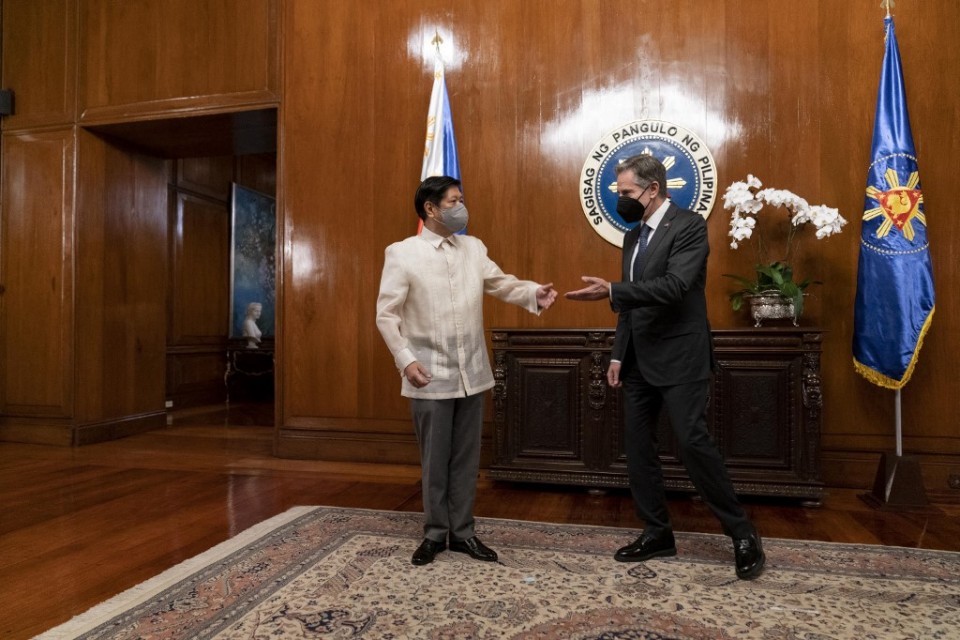 US Secretary of State Antony Blinken met with Philippine President Ferdinand Marcos Jr Saturday in a bid to bolster the countries’ “strong” alliance, as China conducts military drills around Taiwan.

Blinken is the most senior US official to visit the Philippines — a treaty-bound ally of the United States — since Marcos took office.

“The alliance is strong and I believe can grow even stronger,” Blinken told Marcos at the presidential palace.

Marcos hailed the “special relationship” between the two countries.

The United States has a security pact with the Philippines, and has backed the Southeast Asian nation in increasingly heated disputes with Beijing in the South China Sea.

Blinken’s meeting with Marcos came after China launched a series of military exercises around Taiwan that the United States has condemned.

On Saturday, the third day of the war games, Taiwan accused the Chinese military of simulating an attack on its main island as they deployed fighter jets and warships just 400 kilometres (250 miles) north of the Philippines.

The drills came in response to US House Speaker Nancy Pelosi’s visit to Taiwan, which prompted fury in China.

Marcos said Pelosi’s visit demonstrated the existing “intensity” of the conflict, rather than adding to tensions.

In virtual talks with his Philippine counterpart Enrique Manalo, Blinken said the United States was “determined to act responsibly” to avoid a crisis.

“Maintaining peace and stability across the Taiwan Strait is vital not only for Taiwan but for the Philippines and many other countries,” Blinken told reporters after the meeting.

Manalo told Blinken the Philippines could not afford a “further escalation of tensions in the region” as it battles “significant challenges”, such as reviving its pandemic-hit economy.

“The Philippines continues to look at big powers to help calm the waters and keep the peace,” he said.

– ‘Significant escalation’ –
Blinken arrived in the capital Manila on Friday after attending an Association of Southeast Asian Nations summit in Cambodia.

There, he condemned China’s drills as “a significant escalation”.

Like other ASEAN members, the Philippines does not formally recognise Taiwan and has shown no appetite for backing Taipei against Beijing — its biggest trade partner.

The United States has a complex relationship with the Philippines — and the Marcos family.

After Ferdinand Marcos Sr ruled the Philippines for two decades with the support of Washington, which saw him as a Cold War ally, he went into exile in Hawaii in 1986 in the face of mass protests and the nudging of the United States.

As regional tensions rise, Washington is keen to preserve its security alliance with Manila, which includes a mutual defence treaty and permission for the US military to store defence equipment and supplies on several Philippine bases.

It also allows US troops to access certain military bases in the country.

Blinken said Saturday the US commitment to the mutual defence pact was “ironclad”.

“We always stand by our partners,” he told reporters. “It’s important to underscore that because of what’s happening north of here in the Taiwan Strait.”

Marcos has indicated he will strike a balance between China and the United States, which are vying to have the closest ties with his administration.

Washington-Manila relations rebounded towards the end of the tenure of Marcos’ predecessor Rodrigo Duterte, who had threatened to axe a key military agreement with the United States.