In a tweet, Morrison said he hopes the two nations’ relations would continue to flourish under the new Philippine leadership.

I congratulate Ferdinand Marcos Jr @bongbongmarcos on being elected President of the Philippines at the national elections on 9 May. Following the 75th anniversary of Australia-Philippines relations last year, we look forward to continuing to advance our long-standing friendship.

Kishida sent his best wishes to Marcos though a letter of congratulations.

He conveyed his determination to further promote cooperation as strategic partners in a wide range of areas toward the realization of a “Free and Open Indo-Pacific”, according to a statement from the Embassy of Japan.

Marcos is set to become the next Filipino president, with the partial and unofficial tally of the Commission on Elections pointing to his win.

Based on 98.35 percent of election returns as of Friday, Marcos Jr. has garnered 31.1 million votes while second-running Vice President Robredo has 14.8 million. 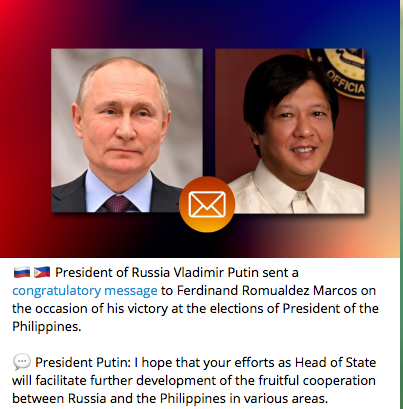 Congratulations to all the people of the #Philippines on their national elections, to all the candidates who campaigned, and to President-elect Marcos for his victory.

The EU looks forward to working with the new administration to advance our relations and EU-ASEAN ties.

Once Congress formally proclaims Marcos as the President-elect, the transition period will begin leading to the inauguration on June 30.