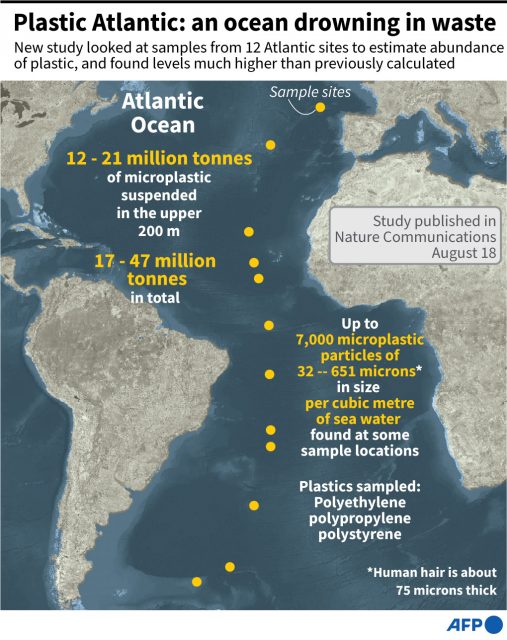 PARIS, France (AFP) — There may be more plastic floating just beneath the surface of the Atlantic ocean today than the estimated total weight of plastic waste dumped in it since 1950, new research showed Tuesday.

The findings, based on analysis of samples of the three most common plastic materials and computer modelling, highlight the unseen scale of the pollution clogging the world’s second-largest ocean.

Earth’s oceans contain an estimated 150 million tonnes of plastic, often in the form of microplastic particles.

These tiny fragments have been detected in every ocean on the planet and even at the bottom of the world’s deepest trench.

Despite its ubiquitousness, ocean plastic is hard to accurately measure.

To remedy this, researchers from Britain’s National Oceanography Centre analysed the plastic collected in samples from 12 sites spanning 10,000 kilometres of Atlantic Ocean.

They then assessed the abundance of the three most common ocean plastics: polyethylene, polypropylene and polystyrene at depths of between 10 and 100 metres below the surface.

Based on plastic generation trends dating back to 1950, the researchers estimated that the Atlantic now contains between 17 and 47 million tonnes of plastic.

That upper figure is higher than all estimated plastic input into the Atlantic since the middle of the last century.

“Similarly, there is a logistical and technological challenge in continuous monitoring plastics in the open ocean.”

The research found that the upper 200 metres of the Atlantic — home to the vast majority of its sea life — contained up to 20 million tonnes of microplastic.

It is thought around eight million tonnes of plastic enter the ocean every year, causing as-yet unknown damage on the marine food chains that hundreds of millions of people directly rely upon for food and income.

Pabortsava said that even though plastic can be recycled, waste management strategies were failing to stem the flow reaching the ocean.

“Sources of plastic are numerous and go beyond littering,” she said.

“For example, a lot of plastic can come from the household activities (e.g. washing synthetic clothing), or from erosion of car tyres, and surface paints.

Coastal erosion from waste dumps could be a significant source of plastics flowing into the ocean, she added.