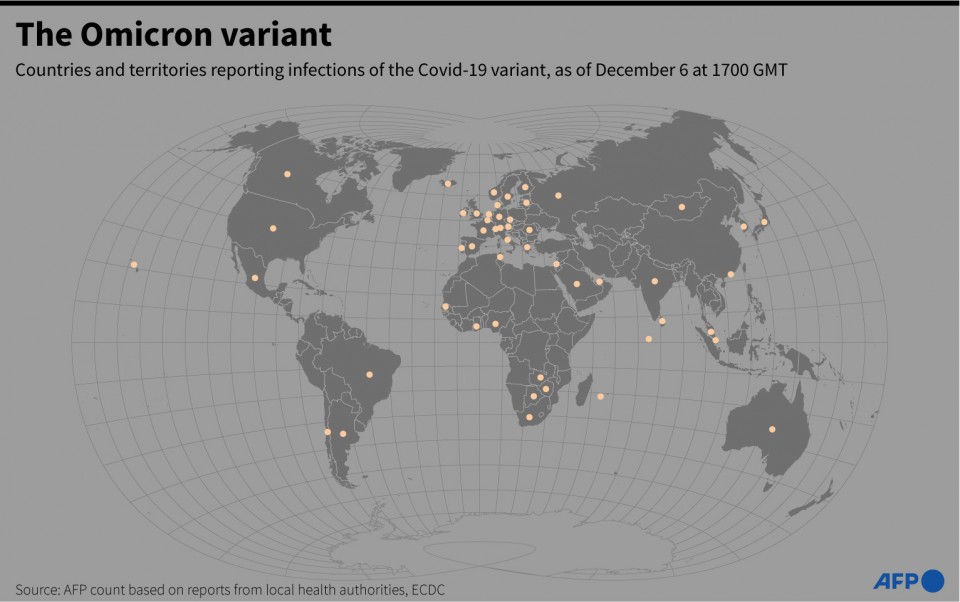 HONG KONG, China (AFP) — Asian stocks fell on Monday on fears about a fresh global surge in coronavirus infections and as the future of US President Joe Biden’s massive social spending bill was thrown into doubt after it lost the crucial vote of a moderate Democrat.

With traders beginning to wind down ahead of the festive season, analysts said trade was thinner and markets more susceptible to swings, but the mood has become increasingly glum as central banks start paring their huge financial support to fight inflation.

At the same time, economies are taking a hit as the fast-spreading Omicron coronavirus variant forces governments to reimpose containment measures while consumers are staying at home.

“Omicron remains a concern and cases are on the rise,” said Robert Schein of Blanke Schein Wealth Management. “Investors should be prepared for Covid to continue to be a main factor in market performance heading into 2022.”

“After the bull run we’ve seen over the past 21 months, investors aren’t as used to prolonged periods of volatility.”

Investors got another negative lead from Wall Street where all three main indexes ended sharply lower on Friday after the Federal Reserve said it would speed up the taper of its bond-buying programme and indicated three interest rate hikes before the end of 2022.

While the announcement was initially welcomed as clearing up some policy uncertainty, it signalled the beginning of the end of the era of cheap cash that has helped propel global markets to record or multi-year highs for much of the past two years.

The virus spread has also hit the oil market on concerns about the impact on demand as countries revert back to containment measures, with both main contracts down more than two percent to extend Friday’s big losses.

Investors were also jolted by news that US Senator Joe Manchin would not back Biden’s $1.75 trillion Build Back Better bill, dealing a massive blow to the president and his hopes for giving an extra boost to the world’s top economy.

The West Virginia lawmaker’s vote is crucial to getting the bill through the Senate and his decision leaves Democrats with few options to move forward.

The White House on Sunday said it would press Manchin to return to the table and “honour his prior commitments and be true to his word.”

With no fresh spending now in the pipeline, some analysts said they would lower their growth outlook for the United States next year.