“TRAVEL and change of place impart new vigor to the mind.” It was quoted by Seneca, a Roman Stoic Philosopher. That’s why, I and my four office buddies, despite conflicting schedules and tight-budget days, strove hard to make an adventure happen and traveled to Anawangin cove in Iba, Zambales. The afternoon travel
We had arrived at the bus station at 9am Saturday morning, but we had to wait for the bus until 12noon. We felt bad waiting for hours. Who wouldn’t feel lousy if you wait for at least three hours for a ride? But it wouldn’t be that boring if you are with your friends, as well as with other passengers feeling the same way while waiting for the arrival of your bus.
The bus arrived past 12 nn and left at quarter to 1 in the afternoon. We arrived in Olongapo at about 3:45pm and we took the bus going to Iba. We arrived there at 5:00pm. 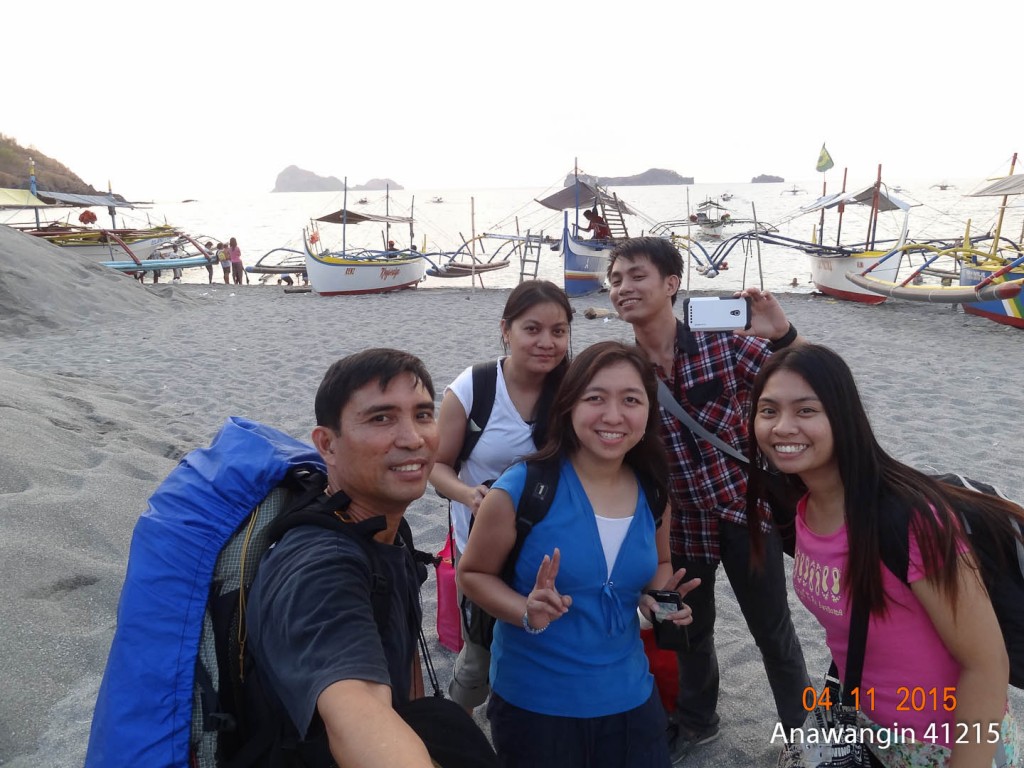 Arrival in Iba, Zambales
We went first to the public market to buy food which we’ll cook later. It was so amazing that we were able to buy a kilo of big squid for only Php 60.00! We also bought some rice, tilapia, hotdog and other fish to be grilled. We bought some more food ingredients, and some black coal (uling) for cooking. All in all, we spent only Php300.00 for our food.

We rode a tricycle to reach our destination, before we go to the island cove. It was a bit of a long ride and the fare for one person costs Php30.00. 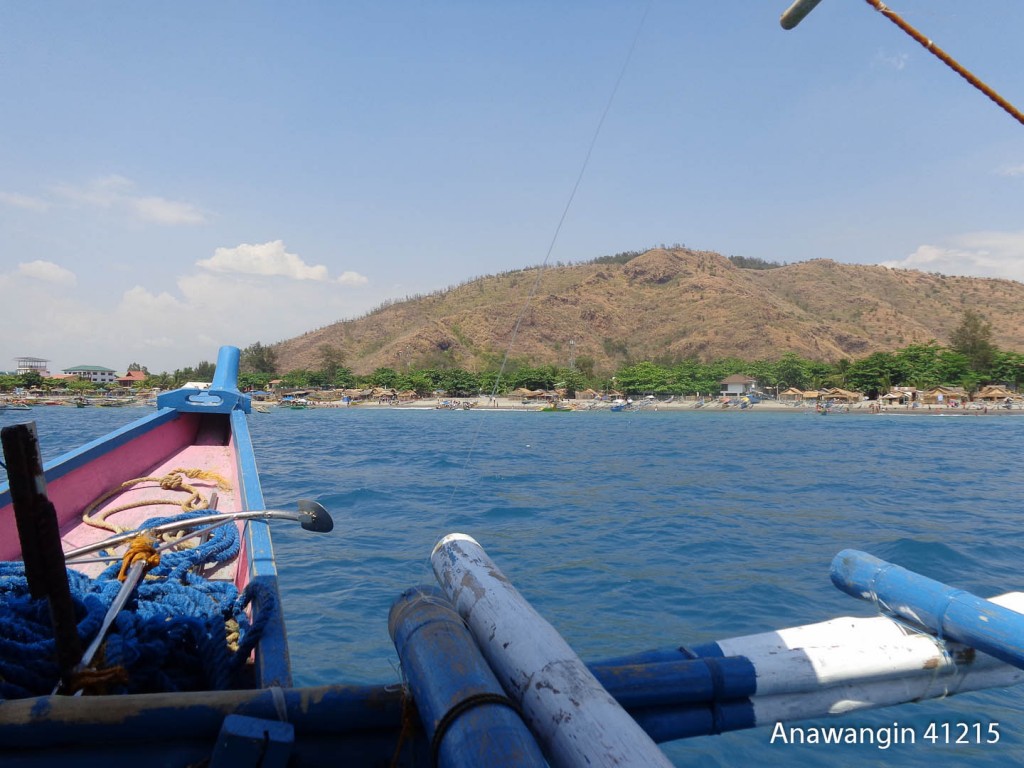 After we had successfully boarded the boat, we had a group selfie shot. One would not be able to guess from our selfie shot just how tired we were. Instead, the picture reflected our excitement that we are finally going to the island. The sun had just began to set when we reached the middle of our trip; the waves also got stronger. We never felt fear, instead we were in high spirits. It was like we were off to another world, and all our stress disappeared.

Meanwhile, we met a guy who traveled alone. My friendly girl buddy talked to him. We learned that he was a teacher and that he really preferred traveling alone. Arrival at the Anawangin Cove
The boat ride lasted for about 30 minutes; it was almost 6:35 in the evening when we reached the shore. The boat service crew helped us prepare the two tents on the place we chose. We chose a place near the shore. We had some neighbors who were having fun with their bonfires. Other tents were also set up in the dark. It was fun looking at our environment. It really looked like a camping site at night. The only lights were the bonfire, torches and other improvised lighting. There was no electricity, no cellphone signal. But everything seemed so alive! It felt like being in another world.

After setting up our things, we started to prepare to cook our dinner. We used coal and Kuya Rey, our athletic mountaineer friend and our “group leader” had brought a mini butane gas stove so we could cook faster. After we ate our dinner, we rested a little and prepared to swim. This will be my first night swimming in the ocean!

The sea of brightness
Three of us went to swim, while two of our buddies fell asleep out of tiredness. It was really dark and quiet by the shore. We heard the muted sounds of songs by the band Eraserheads coming from the tent nearest to us. The night was quite alive. It was a warm night and we laid down on the beach and allowed the waves to carry us to the shore. It was so lovely looking up to the sky with the countless night stars twinkling in the dark. The scenery of this sea of shining bright stars took away the gloom of the darkness. For the first time in my life, I realized the beauty of the stars and the night sky. This was how beautiful the night was before artificial lights were invented!
After taking our bath in the dark shower place not so far from our tent, we decided to take some rest. Although our other three buddies were sleeping tightly, I and my sister buddy couldn’t sleep well because of the sound of our surroundings. There were the sounds of chattering friends (barkada) nearby, the thrashtalk of the drunken guys walking behind our tent, the singing of our “neighbors” from the other tents among others. Instead of getting irritated, I just enjoyed the various sounds I was hearing and later on slept a bit well. 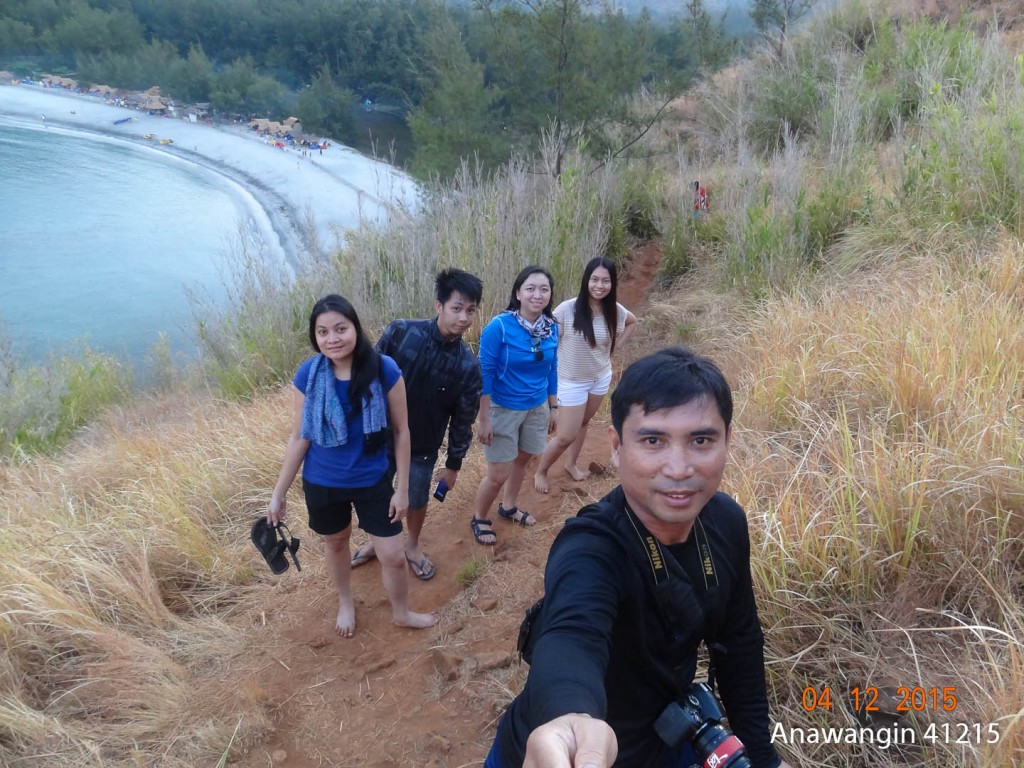 The morning hike to Mt. Pundaquit
We woke up early in the morning to prepare our climb to Mt. Pundaquit, the mountain beside the shore. The surroundings were quiet. Guess our “neighbors” from the other tents had just begun sleeping. Good. Then after warming our bodies with some hot coffee, and after applying sun block to our skin, we then started the walk to the mountain.

Although I had already climbed a mountain before, I found the climb to Mt. Pundaquit a little bit risky. The rocky climb was steep; just a few steps at the side, there was the terrifying way down the sea, so one should be very careful in climbing up there. As much as possible, you should wear a hiking shoe or sandals, though my other comrades had climbed barefoot. Thanks God it was not raining so the climb was not slippery.

The top
There are four stations or resting area before we reached the top of the first mountain. The scenery up there is really breathtaking! The hard work in climbing the top really paid off. You could see the landscape view of Anawangin, the sea and the mountains. It was really a lovely view of nature. All our negative feelings seemed to fade and the awe- inspiring scenery took it all away.

We took some pictures as the sun started to shine in the east side of the mountain. It was so beautiful! 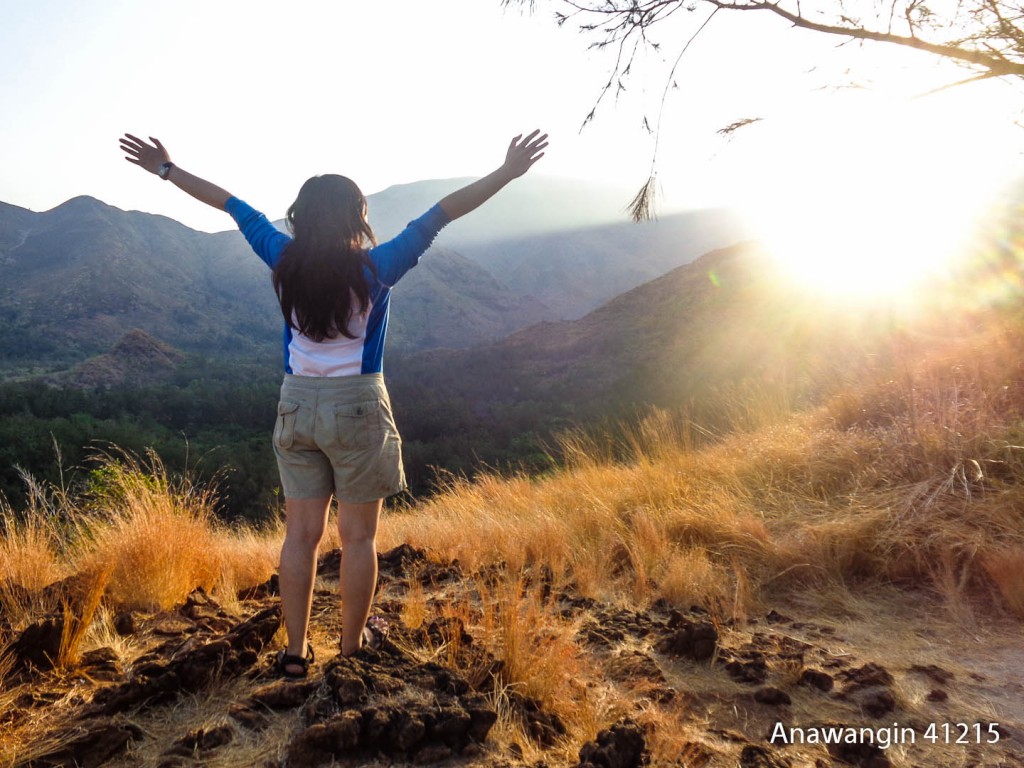 After we had taken more pictures, we started the trek down as more local tourists came up the mountain. The way back was a bit harder because I might slip down with a wrong step. But thanks to some help from some guys, I was able to go down safely. 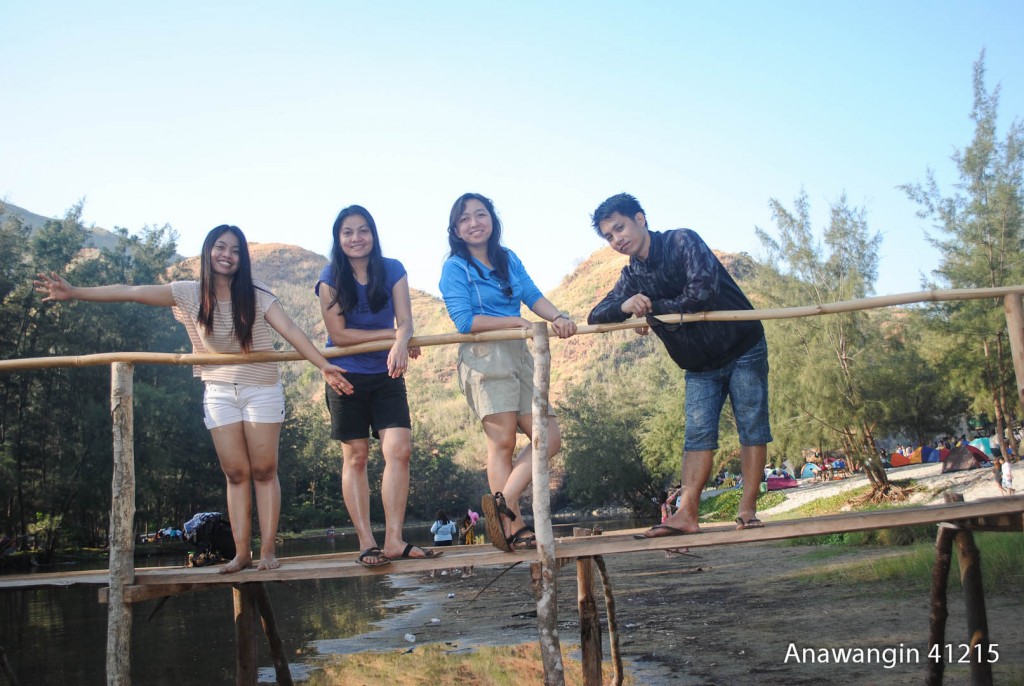 Down by the mountain was a lake. We took many pictures as we walked by.

When we arrived at our tent, we immediately ate breakfast and prepared to swim.

Two vendors of souvenir items passed by our place and I bought some keychain souvenirs for my friends — a set of pearl jewelry for mama, an eagle emblem necklace made from shark teeth, an arrow and bow, and a long bamboo coin bank. It’s good to know that one of the vendors was our brother in the Church.

Now, time to go to the beach!

The beautiful sea
It was a bright sunny day and it’s so beautiful to see the whole Island scenery, the blue sea, the green mountains, the black rocks, the gray sand and the happy people around. Though I don’t want to go farther from the shore, as I was not a good swimmer, our kuya Rey showed me a beautiful trick when he asked me to wear the goggles and invited me to swim under. I saw coral reefs and fishes and it was wonderful! It might have been more exciting if I had bought a snorkel to breathe longer under the water.

It was fun swimming in the beach, especially when you are with your close friends. We shouted and we laughed. It was like there’s no more tomorrow, as if time will not end. I didn’t feel any negative thought at that time. I was floating over the water, feeling really relaxed and contented.

We took more pictures – as many as we wanted as we left the place. (Who knows what the best shot would be to serve as a remembrance of that lovely trip!)

Now’s the time to go
We were then fetched by the boat service at 2 o’clock in the afternoon. We were waiting for this boat ride because we haven’t seen it when we first went at dawn. Now that the sun shone bright, we will have clearer pictures while on the boat. We enjoyed the boat ride as we saw clearly how the waves hit the mountains when we passed by. We saw some small caves at the foot of the mountains and wondered what was in there. Again, we enjoyed the strong waves when we reached the middle of the sea. While on our way, we saw a tin can and a plastic bottle floating on the sea. How sad that some people are just too crappy that they would throw waste into the sea.

Thank God that we still managed to reach a place with the beautiful nature still intact – where the sea was still clear and mountains were still green.

We arrived home at 11 in the evening due to heavy traffic. That’s why it is really more advisable if you will hire a service van than go commuting. By the way, the overall expense of each of us only added up to Php 1,200.00. Cheap right? Just add some more in your budget if you want to buy a souvenir.

Well, we might have all gotten tired, with various body aches and pains because of the long trip, but the memories and fun we had in Anawangin cannot be bought by anything in this world. What makes it more special was the memories of a trip you had with your friends.

Now, our mind and body had been conditioned for another long day ahead and the memories of that invigorating trip we had, added more inspiration to our lives.