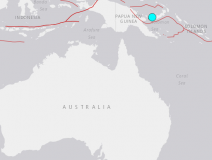 “Based on all available data, a destructive Pacific-wide tsunami is not expected,” it said.

New Britain, the largest island of the Bismarck Archipelago, is east of mainland New Guinea and has a population of around 500,000 people.

It lies on the 4,000-kilometer Pacific-Australia plate, which forms part of the “Ring of Fire”, a hotspot for seismic activity due to friction between tectonic plates.