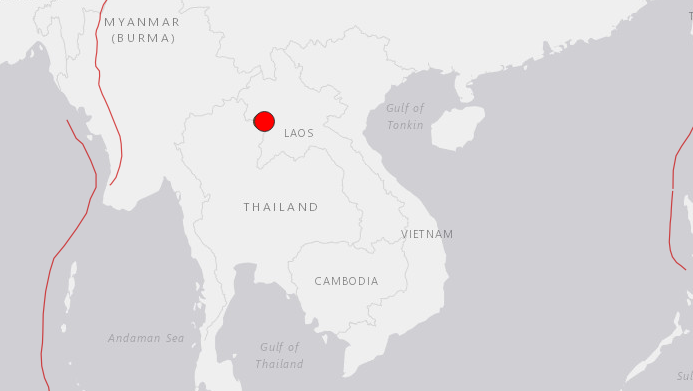 There were no immediate reports of damage after the quake hit at 6:50 am (2350 GMT Wednesday).

But shaking could be felt more than 700 kilometers (435 miles) away in the Thai capital Bangkok, where Pope Francis is currently on a four-day visit.

“The shaking… was the main shock from a quake in Laos at 6:50 am and was felt in northern and northeastern Thailand and Bangkok and suburbs,” said Sophon Chaila, an official at the Thai Meteorological Department.

“As of now there is no report of damage,” Chaila added.

“The ceiling lights were shaking quite strongly. I felt dizzy and scared,” said Hanoi resident Tran Hoa Phuong, who felt the earthquake in her 27-storey apartment building.

It hit about three hours after a 5.7-magnitude earthquake struck the same region of Laos, near the site of the large Xayaburi dam project.

Information is slow to trickle out of the closed communist state, and there were no reports of damage or injuries after the twin quakes early Thursday.

Pope Francis arrived in Bangkok on Wednesday and has a busy agenda Thursday meeting officials and the Thai king before he leads a mass in the evening.

There was no word from his team on whether he felt the quake.