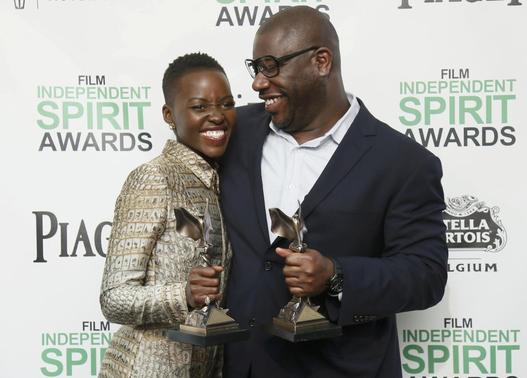 (Reuters) – Harrowing slavery drama “12 Years a Slave” swept the Independent Spirit Awards on Saturday with five wins, just one day ahead of the Oscar ceremony on Sunday.

“12 Years a Slave” won five of its seven nominations at the awards show for independent movies made on small budgets, including the top award for best feature.

“12 Years a Slave” producer-director Steve McQueen dedicated the best picture Spirit Award to lead actor Chiwetel Ejiofor and supporting star Michael Fassbender, who were both nominated but did not win.

McQueen also won best director, and is a strong contender in the Oscars director race on Sunday.

The Spirit Awards, held in a giant tent on California’s Santa Monica beach, is usually a sunny and crisp affair. But this year guests were armed with umbrellas and rain boots as bursts of heavy rain pattered on the tent.

Rising star Nyong’o, who made her film debut with “12 Years a Slave” and is nominated for an Oscar on Sunday, jumped in delight as her name was announced as best supporting actress, giving Ejiofor a hug and being carried to the stage by McQueen.

“Thank you Film Independent. Not a bad way to celebrate my birthday!,” the actress, who turned 31 on Saturday, said with a big smile and dedicated her award to her mother.

Blanchett, an Oscar favorite for best actress, won the Spirit Award for best female lead for her role as a woman dealing with a financial fall from grace in “Blue Jasmine.”

“This film proves that audiences are interested in stories led by women, and that they can in fact make money,” the Australian actress said.

McConaughey, who has made a transition from big budget comedy fare to independent dramas in the past two years, was named best lead male actor for his role as AIDS sufferer Ron Woodroof, who became a beacon of hope for the AIDS community in the 1980s.

McConaughey’s co-star Leto, another Oscar favorite, won best supporting actor for playing a transgender HIV-positive woman in “Dallas Buyers Club,” and had one of the afternoon’s more amusing thank-you speeches.

“In case this is the last time I get to thank anyone, I wrote down a couple of names because it’s important to me,” the actor said, before reading off a long list that included his nominees, co-stars, family, artists, musicians, actors, “all the women I’ve been with and all the women that think they’ve been with me” and “my future ex-wife Lupita.”

He also thanked Hoffman and shared his award with the family of Gandolfini, who was nominated in the category.

The Spirit Awards, sponsored by the Los Angeles-based non-profit group Film Independent, are Hollywood’s top honors for independent film and art house projects made for less than $20 million.

Notable Spirit Awards winners in previous years that have gone on to win the Oscar the following day include Natalie Portman for “Black Swan” in 2011, and Jennifer Lawrence for “Silver Linings Playbook” last year.

Other winners from Saturday included best documentary for “20 Feet From Stardom,” a film about backing singers, and lesbian coming-of-age tale “Blue is the Warmest Color” for best international film.

“Nebraska” writer Bob Nelson won the best first screenplay award. “This is really the fulfillment of a boyhood dream to one day become the oldest recipient of the first time screenplay award,” Nelson, 57, quipped.

The best first feature film award went to Ryan Coogler, the 27-year-old director of “Fruitvale Station,” based on the killing of a young black Oakland, California man who was shot down on New Year’s Eve in 2009 by white police officers.

“I can’t help but think when I hear stories like this, if Jonathan Ferrell looked like Matthew McConaughey, he wouldn’t have been shot down, he would have been alive,” Coogler said, winning a standing ovation from the audience.

The Spirit Awards ceremony is televised on Saturday at 10 p.m. EDT on cable network IFC.